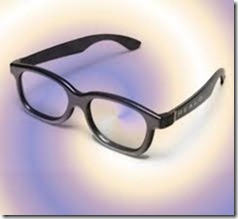 I thought they were cleaned or recycled, like talked about in this post.  But now, I realize I am incorrect.

Yesterday, my husband went to see Thor in 3D.  After the movie, he asked one of the theater employees where he should put the 3D glasses he used and the response was, “Just toss ‘em”.  Seriously?  No separate container to put them in to later be cleaned or recycled??

Even if there is a separate container… What about all the ones that end up in the trash from people who don’t put it in the right bin?  What about the theaters that don’t even have a separate bin?

What can be done about this?  The most obvious solution for me is to not make as many 3D movies or stop altogether!  I mean, what is up with all the 3D movies?  Can we not just watch a regular movie?  I saw Avatar (not in 3D) and it was a great movie!  (Can you tell I’m not a fan of the 3D movies?)

Okay, so for all of you that don’t like my no 3D movie option, how about we ask all theaters to have a separate container for the glasses?  Or…  and this is my favorite solution, but I’m sure the movie companies and theaters won’t like it… have some sort of incentive for people to save their glasses.  For instance, if you bring your own 3D glasses to a movie you don’t have to pay the whole $3 extra or however much the theater charges.

That’s my 2 cents anyway.  Not that anyone asked.  I just had to vent a bit about that.  Thanks for sitting through it (if you made it this far in the post).

I need to know, though.  What do you all think?  What is your solution?  Do you even like 3D movies?  (Please tell me I’m not alone in the anti 3D stance!)