Honestly, I don’t know what I was thinking when I got the clown costume.  My son has never expressed any interest in anything clown related.  I really just got it because it was the only thing in his size that looked good and I didn’t want to come home with costumes for the girls and nothing for him.  He was gracious in receiving the costume at the time, but later asked me if he had to wear it.  I told him that we could get him something else.  I think the clown costume was only a couple bucks, so it’s not like it’s a huge loss.

So, we got online together and looked at discount boys costumes.  It was so fun to be able to do that with him.  Rarely do the kids get to look at a something online and have the opportunity to pick what they want from a bunch of options.  It was fun for him!  I tried to sway him towards superman so that all the kids would be in the same theme, but he wasn’t interested in it, so I didn’t push it.  He has never gotten to pick out his own costume, so I wanted him to be able to pick it out himself.

He was looking at the Power Ranger costumes.  He’s fascinated with them for some reason.  Since he doesn’t watch the show, I don’t understand it… but I guess it’s normal to not understand everything your kids do!  Anyway, he decided on the Leonardo Muscle Costume from Teenage Mutant Ninja Turtles.  So, we ordered it right away to make sure we would have it in time for Halloween.

It got to our house super fast, so I guess we actually didn’t have to order it so early, but that’s okay.  Of course, we opened it right away!!!!  It looks really nice and actually well made.  Lots of Halloween costumes look like they will fall apart at any moment, and I was pleasantly surprised that this costume looks like it will survive a night or two or trick or treating!

He tried it on and I am happy to report that it fits perfectly.  He’s almost 8, so I ordered size 8-10.  I’m glad it fits well and I don’t have to worry about trying to return it for a new size…. it does look a little short in this picture, but it looks great in person, so I’m not sure why it looks that way?? 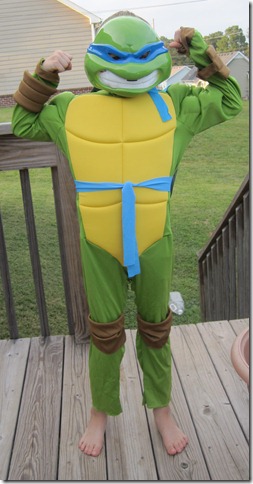 If you don’t want to hassle with the stores and picking through all the aisles, I recommend you check out the Costume Super Center online and order your kids costumes.  They really have a great selection and your costume will definitely get to your house on time if you act quickly.

So, no more after Halloween clearance costumes for me!  I will shop for discount boys and girls costumes online!  It’s so much easier and the kids get to actually pick out their own costumes.  As they get older that is becoming more and more important to them!

Have fun shopping!  I hope you all have a great Halloween, no matter how you celebrate it!